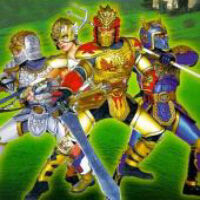 The Mystic Armor is the legendary magical armor used by the Mystic Knights to fight the forces of Queen Maeve and Temra.

According to Fin Varra, the Mystic Armor was created long before the time of the little people by ancient ones. They forged the armors from silver and gold, each imbued and reinforced with the power of the elements. Whereas the four original armors' elements being Fire, Air, Water, and Earth, the fifth one is Forest. Regardless, each set of armor has a dragon theme and color scheme that complements its elemental power (red for Fire, white for Air, blue for Water, gray for Earth and brown for Forest, respectively), and were forged to bring peace throughout Island of Kells.

Although a Knight can summon his/her Mystic Armor via his/her Mystic Weapon as a sort of transformation trinket, he/she can only do so after proving his/her right by defeating a Temra Sentinel alone. But even he/she is advised to use their armor only during times of dire need.

Each set of armor provides great protection against harm and comes with a Dragon's Breath Dagger and Battle Gauntlet, located on their left arm, which could unleash fiery energy at their enemies.

The following are four original Mystic Armor sets prior to the creation of the fifth. Each of them was hidden in their respective hiding place until the would-be wearer arrived to summon it. Mider had displaced each member of his Sentinels of Temra to safeguard the armor and ensure the legend of the Mystic Knights wouldn't come into fruition, only for such a decision to provide the would-be knights a test to prove their mettle instead.

The following is new Mystic Armor forged after the original four sometime prior or during the events of the series. Since this armor never fell into the hands of the Sentinels of Temra, new bearers of these armors must defeat an adversary as formidable as them instead.

Community content is available under CC-BY-SA unless otherwise noted.
Advertisement