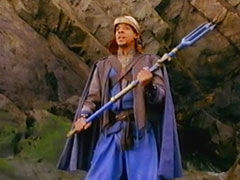 The Barbed Trident is the main weapon of Prince Ivar, the Mystic Knight of Water.

This weapon is in affiliation with the element of water. However, it is capable of producing electrical energy in the form of blue-colored lightning bolts. While fighting, the trident can also be used to stab or bludgeon opponents.

Community content is available under CC-BY-SA unless otherwise noted.